What Is Happening To Energy Prices?

Guest Article written on 4th October by Maria O’Sullivan of Costgard, before the further increases this week.

The UK’s wholesale energy markets have reached record highs in recent weeks, having increased gradually since the beginning of the year.

Reasons include a global surge in the demand for gas when gas stores were left depleted by a cold winter, the increased energy demand across Asia and a race to refill gas stores before the return of colder temperatures. Half of the UK’s electricity is generated in gas-fired power plants and we have very little gas storage now.

But that is not all. There have been a series of nuclear reactor outages; the shutdown of the UK Power Interconnector between the UK & France due to a fire; the UK has had one of its least windy summers since 1961 so wind power has been low too.

Back in August, the UK regulator said, "This increase is driven by a rise of over 50% in energy costs over the last six months with gas prices hitting a record high as the world emerges from lockdown."  The price has continued its upward trend as the chart below shows the wholesale price for winter 2021-2022: 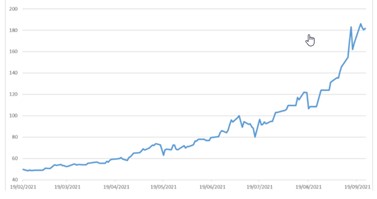 Already, nine energy suppliers have ceased to trade and OFGEM has appointed a ‘supplier of last resort’ for their customers.

It means that the contracted rates the customers signed up to are withdrawn and those customers must now negotiate a deal on current market rates.  OFGEM has also put measures in place should a ‘large energy supplier’ cease to trade, which is rather unsettling news. Analysts say that of the 70 or so energy suppliers trading at the beginning of 2021 there may be just 10 or so left in the next few months.

You will be very aware of the closure, albeit temporary, of the fertiliser factories in the North of England due to the record gas prices and the increased price of fertiliser.

This situation affects so many costs of farming as well as procedures. For example, ‘humane’ pig culls for the first time since the outbreak of foot and mouth disease due to the looming shortage of carbon dioxide at abattoirs.

When will prices stop rising, no-one seems to know? However, longer term contracts are cheaper than twelve-month contracts, but that is not to say that they are inexpensive!

Due to the way suppliers purchase and hedge wholesale energy, there may be a need for them to increase the prices negotiated already in a contract. Although this means higher costs, it would be preferential to entering a contract at the current prices.

Of course, if your contract is due for renewal you will have no choice in the matter and we would be happy to help in any way we can.

Perhaps now is a very good time to seriously consider self-generation of electricity.

If you would like to discuss your energy requirements, please do not hesitate to contact Andrew Jones on 07717 442888 or David Quance on 07395 498175 or e-mail sales@dblbuyinggroup.co.uk