Slurry Bugs! Are they a Myth?

For many years I have resisted the idea of using any of the many Slurry Bug products on the market – dismissing them as a waste of money.

Last year, on the recommendation of a trusted soils expert, we decided to try one of these products.  The product we used is a fermented liquid containing 80 different microbes.  We have used it to treat both slurry and FYM.  At risk of sounding like a salesman, I will extol the virtues of this product… 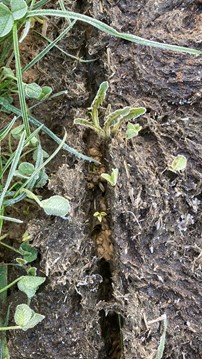 Slurry
The product is introduced to a nearly empty slurry store.  This allows the microbes to act on the small quantity in the store, and multiply as it fills.

Independent research on the product conducted by Kingshay indicated a 20% reduction in crust thickness and a 15% increase in available nitrogen.

The results have far exceeded expectations.  Although a thin crust still forms on top, stirring time has reduced by 75%. The slurry spreads far more easily and consistently.  The most astonishing result is the near total absence of any odour during and after spreading.  This means that we are retaining nearly all of the Nitrogen rather than losing it to the atmosphere as ammonia and nitrous oxide.  The slurry then disappears into the soil in 2-3 weeks rather than the expected 4-6 weeks.

Also notable is that we no longer kill earthworms with slurry.  Some fields have now had two applications and what were previously fairly lifeless ex-arable fields now have many more earthworms and improved soil structure.

Cost – for a 250-cow dairy herd housed for 5 months over winter, the cost of this product is LESS THAN £300 PER YEAR.

FYM
The same product can be used to treat FYM to turn it into a product known as Bokashi.  The liquid is applied to the straw yard using a watering can, once a week before strawing up.  When removed from the barn, it is sheeted down and allowed to ferment for 8-10 weeks before spreading.

Like the slurry, spreading is easier and more soil friendly – disappearing rapidly, reducing contamination of grazing or silage.  Odour inside the shed is non-existent – even at bed level.  Straw usage has reduced by around 30 %.  There are also many benefits for soil structure, availability of nutrients and therefore resilience to weather extremes.

Contact Tom on 07496 760242 or e-mail tommalleson@fgcgagric.com for more information.