If you were given a 2ppl milk price increase and could pocket the annual cashflow benefit in the first three months, would you be interested?  This is what one of my clients did this spring by turning his 7500 Litre autumn calved herd out to grass one month earlier.  It wasn’t a matter of just opening the gates!  Access, water and fencing infrastructure were already in place but he was lacking in confidence and knowledge.  He was being told by others of the so-called negative effects, that milk would plummet, cell counts would increase, milk quality would drop, more work getting cows into milk, cows would come bulling etc. with the sharp change in diet.

In fact, none of the above happened.  Feed rate dropped by .15kg/litre saving 3.5kg cake per cow per day and 20kg less silage was fed per cow per day over that period.  Milk production was 0.5 litre per cow higher per day, milk quality was similar and in calf autumn cows didn’t come bulling.

March and April weren’t the best months to be grazing grass.  Nationally spring milk though up was subdued by cold weather especially the record number of frosts we had in April.  What the farmer noticed is that what he grazed initially was regrowing back faster than what he hadn’t grazed.  This gave him confidence to take more silage and expensive protein out of the diet.  The farmer started using a platemeter claimed on a grant previously and started measuring the grass weekly.  With the aid of Agrinet software to manage the information collected it gave him the confidence and information to make decisions quicker as weather and conditions changed.

He has ended up at the end of April/beginning of May with quality grass across the whole area because of early turnout.  Grazing lower grass covers in May has meant grass is green in the base and regrows quicker.  In previous years, mowing grass would be strip fed whilst waiting for grass to regrow elsewhere.

Savings were £8k per month in concentrates saved March – May, plus 500 tonnes less silage fed.  Total saving of £36,500 in 2.5 months!!!  By turning out in mid-March, the benefits were still being seen in late May! 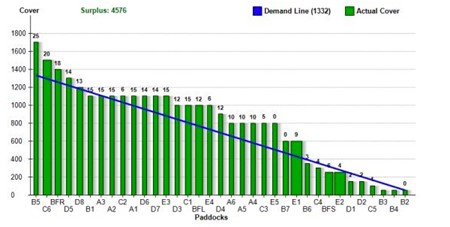 There are a lot of dairy farmers in this situation, irrespective of cow yield who are not making the most of spring grass.  It’s the cheapest and highest quality feed and the savings without losing productivity are significant as shown here.

Contact Gerard on 07976 426420 or e-mail gerardfinnan@fcgagric.com  to put a grazing plan in place now for next spring.  Invest once and see the benefits annually!!